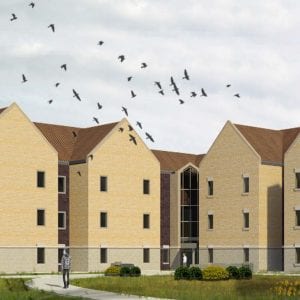 Owner: US Army Corps of Engineers – Omaha District
Architect: LHB, Inc.
Location: Sarpy County, NE
Size: 51,150 SF
Value: $18,870,000
Delivery Method: Design-Build
This design-build project for the U.S. Army Corps of Engineers includes the design and construction of a new, 120 person dormitory. Construction of the LEED Silver, 3-story, 51,150 square foot building began in June. The new dorms will include 30 module suites, each one featuring four bedrooms and four bathrooms, common kitchen, living room space, and a washer and dryer. The new dorm will include a full brick exterior from the ground to the roof and a cementitous roof, which reduces maintenance and has a long life span. The new dorm will tie into the existing ground source heat pump system, which has a central mechanical distribution room in the King Dining facility.

In addition to the new dormitory, the contract also calls for a new access road to be built from Airman Drive to the Nelson Drive and SAC Boulevard intersection. After construction of the new facility, the team will begin demolishing Whiteman Hall North, the oldest current dormitory still in use.