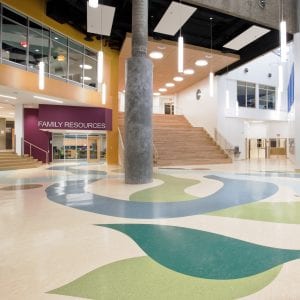 Serving more than 1,200 kids in grades K-8, largely recent immigrants and students of color, this project, though not a brewery or commercial kitchen space, transformed an outdated, unwelcoming school into a community amenity. With increased community programming over the years, the facility was in major need of an upgrade to cater to the multitude of uses now being offered. By creating more open spaces, flexibility was maximized and the site now flows more efficiently and effectively to meet the schools current programming needs. Work included heavy demolition, followed by a major renovation and addition to the front entry, main office, lobby/commons, Family Service Center, and science classroom. A second-floor mezzanine was added, which included a new media center and multi-purpose conference space both overlooking the new lobby and grand staircase, which can also be used as an auditorium. New plumbing, HVAC, electrical, fire alarm and security systems were added. The Andersen United Community School project has contributed to the individual students and staff, as well as the strength of the community and economy. It’s now a bright, energetic, welcoming space that embraces flexibility, community, and technology.